How I Play Games on My Linux PC

I love Linux. In fact, I love it so much that it runs on every computer I use, except for my phone but that can be changed. It always amazes me how much control Linux gives me about my computer and how easy it is to create a script that just does everything that I was doing manually before.

Since Septemper of 2018, I decided to stop dual booting Windows and Linux and only use Linux. I mean, I could play my most played games under Linux: CS:GO, Split/Second Velocity (Wine), NieR: Automata (Wine). But there were still some games that I could not play as either have no Linux port or refuse to run with Wine. I love playing Tom Clancy's The Division and The Division 2. I really enjoyed playing Tom Clancy's Rainbow Six Siege and Wildlands was much fun. Except for The Division, none of these games runs under Wine. So what do?

Before even having the thought of switching to Linux "full-time", I stumbled across this video by Level1Linux. It introduced me to the concept of hardware passthrough and I wanted to do it ever since. Now that my mainboard has an IOMMU and my CPU supports all needed virtualization extensions, I was ready.

At that time I was using a AMD Ryzen 2400G and a Nvidia Geforce GTX 1060. I chose this particular CPU as it contains an iGPU, allowing me to have video output of my host even when I pass the 1060 through to my VM.

While this allowed me to play The Division, it was tedious to reboot to not have the GPU bound to the vfio-pci module so that I could use it on my host. Most guides expect you to have a second powerful GPU so that you don't have to worry about the unavailable GPU but to me it seemed like a waste.

The only problem with this was that the Nvidia modules kept being loaded by the X server. This was annoying since I had to blacklist the modules, which prevented me from using the GPU on my host. The solution, albeit very hacky, was a custom package which installed the kernel modules into a new folder from where the modules were manually inserted using insmod by another script.

My host's video output comes from my Ryzen's iGPU. It is not powerful enough to run games like Split/Second Velocity or CS:GO at an acceptable framerate, so what do?

Since the Nvidia driver for Linux is proprietary PRIME offloading was not an option. I, however, discovered a library which allowed the offloading of an application's rendering - if it uses GLX - onto another GPU: primus.

It worked well enough for games that used OpenGL, like CS:GO. But when I tried launching Split/Second Velocity using Wine, it crashed. Vulkan offloading was not possible with primus, but with primus_vk. This library I never got to work so I cannot say anything about it.

The only solution to that, from my point-of-view, was to create another script with launched a second X server on the Nvidia GPU, start Openbox as a WM on that X server and create a seamless transition from my iGPU- to my Nvidia-X-server using barrier. I then could start applications like Steam on the Nvidia X server and use the GPU's full potential.

Since I was using barrier for the second X server I tried doing the same with barrier inside my VM and all I can say is that it works very well. It made the entire "workflow" with the VM much less painful as I could just take control of the host if I ever needed to without the need for a second keyboard.

Today, my PC runs the same AMD CPU. However, the Nvidia GPU got replaced with an AMD RX 590. This allowed me to use the opensource amdgpu driver, which was and still is a huge plus for me. It complicated some things for me though.

While I can now use PRIME offloading on any application I want, I cannot simply unbind the RX 590 from the amdgpu driver while in X for use in my VM. While the driver exposes this functionality, it crashes the kernel as soon as I try to suspend or shutdown my computer.

There are some issues with this entire setup though: - sometimes after re-attaching, the GPU does not run with full speed. While I can normally play CS:GO with ~80 FPS, it can be as low as ~55 FPS after re-attachment. - the GPU cannot be reset by the Linux kernel. This means that the GPU has to be disabled inside Windows before shutting down the VM. Otherwise, the amdgpu module cannot bind to the GPU which even crashed my kernel.

Ignoring the GPU issue, since around Linux kernel 4.1x I experienced another issue: My computer would sometimes freeze up when opening Steam. In even newer versions, it even freezed by PC when I gave my VM 10GB of RAM, but did not when I gave my VM only 8GB.

By running htop with a really small refresh interval I was lucky to observe the probable cause of these freezes: The kernel tried to swap as much as he could, thus making everything grind to a halt. The solution to this, even though it feels hacky, is to just tell the kernel to swap less aggressively by setting vm.swappiness to either a much lower value to swap later to to 0 to stop swapping.

QEMU, which I used as libvirt's backend, allows you to "pass through" audio from inside the VM to your PulseAudio socket on the host. This worked okay-ish at first, but now - presumably because something got updated inside QEMU - it works well enough to play games. I get the occasional crackling but it is not distracting at all.

I also tried a software called scream which streamed the audio from a virtual audio device inside the VM to the network. As the only network interface attached to my VM was going directly to my host, I just set up the receiver application to listen only on this specific interface. This worked remarkebly well as I never heard any crackling.

The only issue that I had with scream was that, for some reason, Tom Clancy's The Division 2 would crash every 5 minutes when I was using scream. Without it, The Division 2 never crashed. 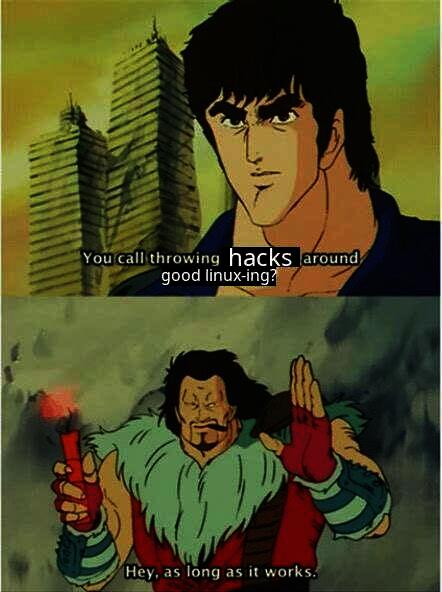 If you have any questions or comments, then feel free to send me an email (Preferably with GPG encryption) to papatutuwawa [weird "a" with a circle] polynom.me.